How Biden finally got to ‘yes’ on canceling student debt 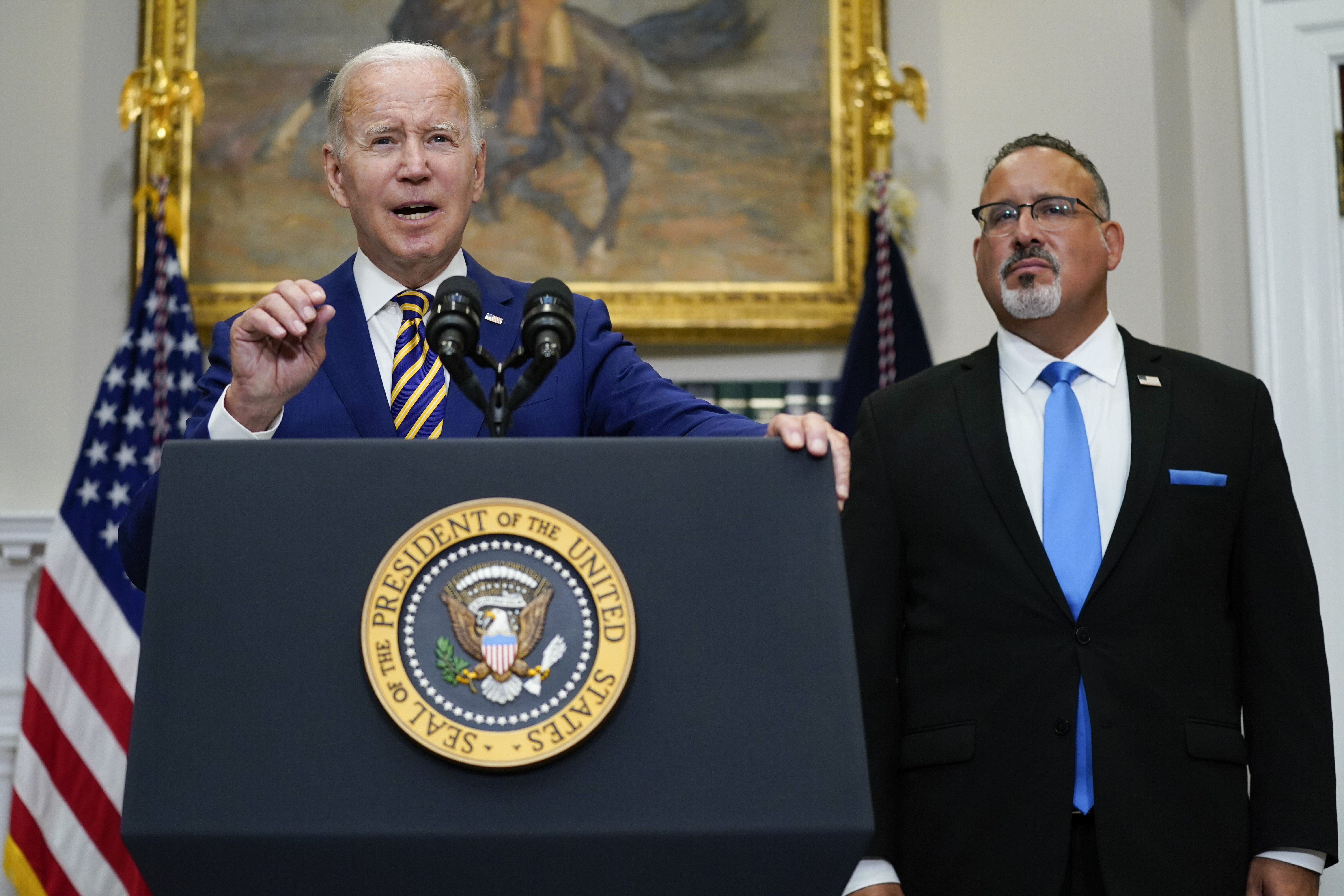 On Wednesday, Biden finally signed off on his highly anticipated student loan assistance package. The plan will deliver hundreds of billions of dollars of relief to tens of millions of borrowers and transform the federal government’s student loan program. It will also extend the moratorium a final time, until Dec. 31, 2022, after which Biden vowed he would require borrowers to resume paying their loans.

The process by which the president came to this policy was contentious and often confusing, filled with high stakes negotiations, pleas from outside stakeholders, internal disagreements, and last-ditch lobbying efforts from key Democratic lawmakers. And in many ways, it grew to echo the governing style that has defined Biden’s tenure in elected office: deliberativeness that can frustrate those around him, a policy platform that seeks consensus, but a late-lean toward progressivism that ends up surprising his liberal critics.

Biden entered the presidency deeply skeptical of the idea of writing off large chunks of student loan debt. He questioned publicly whether he had the authority to do it, and he ruled out emphatically the $50,000 amount of loan forgiveness many progressives aggressively were pushing. From Day One, a coalition of activists, advocacy groups, labor unions and racial justice organizations waged a pressure campaign to move him on the matter.

“You’re not going to get everything that you’re looking for, but you must push for as much as possible,” said Derrick Johnson, president of the NAACP and among the most vocal proponents of debt cancellation in regular communication with the White House.

Johnson was among those proponents of debt cancellation who agonized over the administration’s indecision on the issue. The White House extended the pause on student loan payments and interest — which began under the Trump administration — on four occasions, each time without an answer on the bigger question of broad-based relief.

But while outside advocates fretted, advisers who were internally pushing for broader cancellation believed time was on their side. They viewed the repeated extensions of the payment pause as helpful for keeping the issue alive and active on the president’s docket. Several people familiar with the discussions also said that drawing out the decision toward closer to the election helped amplify the political pressure on the White House to grant more generous relief to borrowers.

“We needed time to make a deliberate decision versus a gut reaction,” said one administration official who worked on the issue.

Still, there were hurdles. The conversations within the administration seemed to circle endlessly around many of the same complex legal, political and economic issues surrounding loan forgiveness, several people familiar with the deliberations said.

One person familiar with the administration’s thinking said that Biden was committed to making good on his campaign promise to cancel $10,000 of debt but that he drew a red line on the need to target the relief to borrowers who needed it the most — and away from higher-earning borrowers who did not.

White House discussions for months were centered around how Biden could cancel $10,000 of debt for various populations of borrowers. White House advisers considered a wide range of permutations for income limitations and targeted relief for individual groups of borrowers, such as public service workers, according to people familiar with the discussions. Other discussions focused on whether to target relief only to borrowers with undergraduate debt, rather than include graduate borrowers, those people said. Officials also examined whether to treat debt accrued by borrowers at public universities differently than loans taken out to attend private schools.

Administration officials also considered ways to provide as much benefit to lower-wealth borrowers as possible, and viewed Pell grant benefits, which are already means-tested to low- and middle-income borrowers, as a good proxy. POLITICO reported last month that the Education Department was studying the idea of providing additional relief to borrowers who had ever received a Pell grant. But the $20,000 amount was kept closely held by advisers at the White House until this week.

As the talks dragged on, the back-and-forth between the administration and outside groups grew tense at times. Groups complained that the administration wasn’t being responsive to their outreach. But a major strategy among advocates “was to never close doors and to show the administration that when they do good things that help people with student debt they’ll get cheered for it,” said Mike Pierce, executive director of the Student Borrower Protection Center. He pointed to the growing momentum from the Biden administration for canceling billions of dollars of loans by expanding existing programs for borrowers who work in public service, students defrauded by their college and individuals who become severely disabled.

The tide began to turn toward significant debt relief at the beginning of the year, several people familiar with the discussion said. By that time, Biden administration attorneys within the White House and Justice Department had largely resolved the issue of whether they believed canceling $10,000 of debt for borrowers was, generally speaking, an option legally available to the president, according to a person familiar with the administration’s thinking.

The policy debate was also moving forward. Susan Rice, the president’s top domestic policy adviser who some activists saw as an impediment to relief earlier on in the administration, came around to the idea of taking action on broad-based debt cancellation, according to a White House adviser and a person familiar with the deliberations. Rice’s full-fledged support for significant loan forgiveness — with income limits — helped drive the decision-making internally and ultimately get it over the finish line with the president who trusts her, those people said.

An Oval Office meeting in May between Biden and that trio of senators — Majority Leader Chuck Schumer, Sen. Elizabeth Warren (D-Mass.) , and Sen. Raphael Warnock (D-Ga.) — brought another turning point, according to several people familiar with the deliberations.

“That’s where it became clear he would do something, and then it was about pushing on the details,” said a Democratic aide familiar with the discussions. Administration officials after the meeting began discussing debt cancellation more seriously and trading proposals for how to structure the program within the parameters Biden set, including the requirement for some type of income limit.

Schumer would go on to say that he called the White House “50 to 100 times” on the issue, adding that he spoke to Biden as late as the night before the announcement.

Over the late spring and summer, the pressure from major labor unions and Hill Democrats intensified. Members of the Congressional Black Caucus and Congressional Hispanic Caucus lobbied Biden to cancel debt until finally, this past week, Biden began to make up his mind. As parts of the administration’s plan began to leak, Johnson fired off one of his last public warning shots. Simply canceling $10,000 of debt for some borrowers was woefully insufficient, he warned. “If the rumors are true, we’ve got a problem,” he said in a statement.

Privately, Johnson spoke with senior White House officials on Wednesday morning before the formal announcement, as well as the two days prior amid a frenzied, last-minute push to finalize the plan.

The president gave an address announcing the details back at the White House. It was Rice who got to take the turn addressing it directly with reporters.

Biden was “clear from the campaign that he was prepared to relieve up to $10,000 in broad-based cancellation,” she told them. “He listened and consulted and studied.”

Alex Thompson and Anna Gronewold contributed to this report.

Barr Lied to the Court to Protect Trump – PoliticusUSA

John Dean Powerfully Argues That Trump Must Be Prosecuted – PoliticusUSA