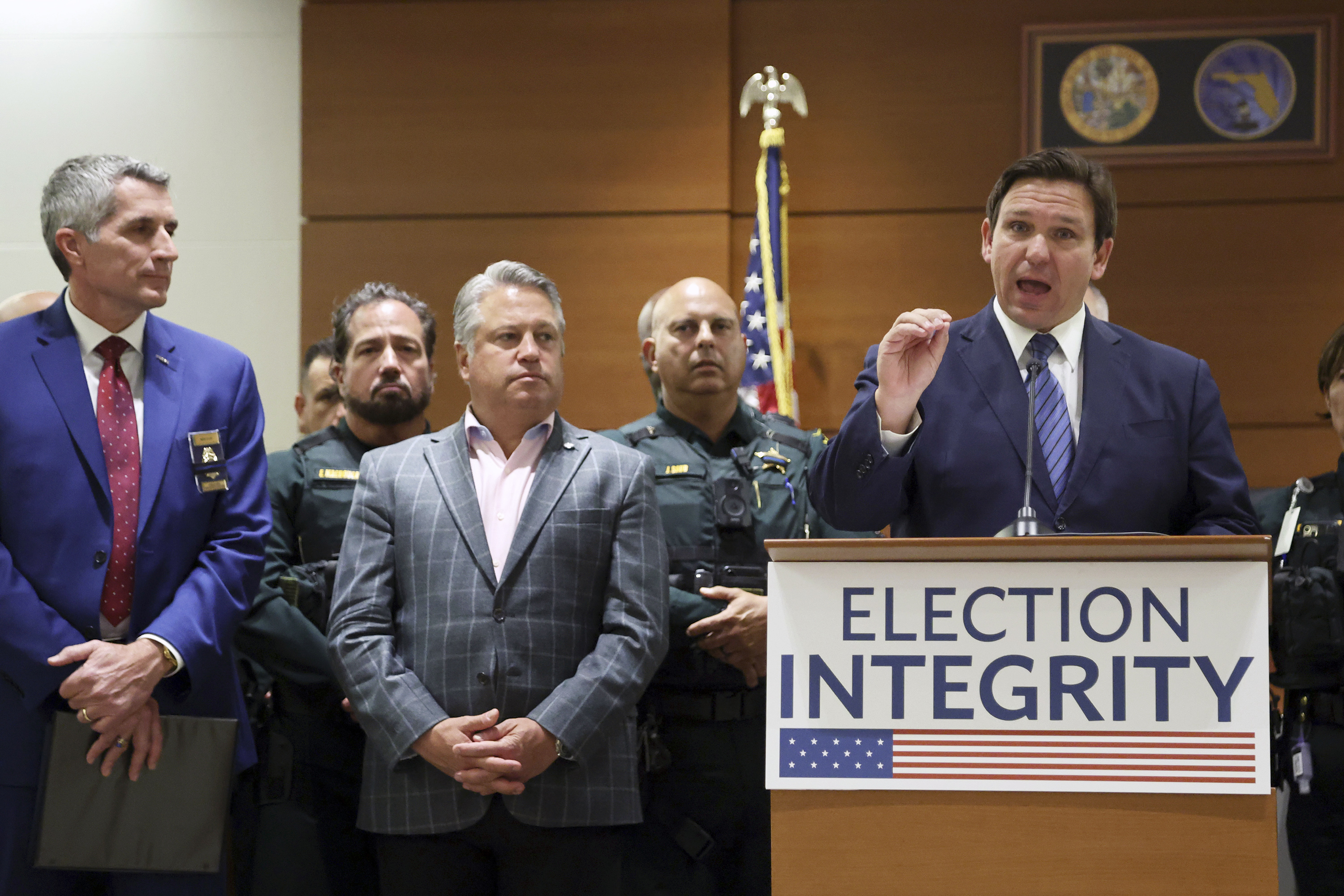 DeSantis highlighted their arrests to show his new $1.1 million election security office, created during the 2022 legislative session, was paying off and rooting out bad actors looking to commit voter fraud. Such fraud has become a top tier issue for Republicans across the country, including DeSantis, who has championed a series of election reform bills, including the creation of a first-of-its kind election investigations unit housed under Republican Attorney General Ashley Moody.

In the days since the announcement, however, several of those arrested have told media outlets or authorities that they had no idea they were not eligible to vote. In court documents filed in five counties, most say at least one official government body — in most cases a local election supervisor — incorrectly indicated to them they could vote, including allowing them to register and sending them voter cards in the mail.

Court records show that many who were swept up by authorities have little education or financial resources and are now back in the state’s criminal justice system. Florida Department of Law Enforcement special agents interviewed the defendants over a few days in early August before arresting them last Thursday.

Peter Washington, a 59-year-old Black man from Orlando, who served 10 years in prison related to sexual battery conviction, told a Florida Department of Law Enforcement special agent that prison officials informed him he could vote. At the time, he was taking classes to transition back into society as his release date from prison approached. He received no indication from the Orange County Supervisor of Elections office that he was not eligible to vote.

DeSantis’ communications director Taryn Fenske did not respond to multiple requests to comment about the arrests.

Voting rights groups have been highly critical of Florida’s creation of the election investigation office and DeSantis’ decision to arrest 20 people. They argue it’s symptomatic of an overall broken system, and that the people could have been removed from the voting rolls rather than arrested in their homes, especially considering local election officials had permitted them to vote.

“To see the state going after folks and dragging them out of their homes in handcuffs and throwing them in jail, that is just overreach, especially when the state knows there was not intent,” said Desmond Meade, executive director of the Florida Rights Restoration Coalition.

Meade was one of the chief architects of Amendment 4, which voters approved in 2018 and setup a framework for most ex-felons to regain their voting rights.

Michelle Stribling, a 52-year-old Black woman from Eatonville convicted in 1993 of second degree murder, told investigators during an Aug. 5 interview at her house that she “could not read or write very well,” and did not understand questions related to her status as an ex-felon on registration paperwork. But Orange County election officials mailed her a voter card after she registered, which led her to believe she was able to vote.

Leo Grant, a 55-year-old Black man from South Bay, told Florida department of law enforcement special agents he has been diagnosed with stress, depression and wears a pacemaker. He also told authorities that a local election office sent him a voter identification card and was able to vote without issue.

“Grant remembers filling out his vote-by-mail ballot at his house and mailing it in for the November 2020 election by putting it in a Post Office mailbox,” read the criminal affidavit.

Grant told the Miami Herald last Friday, one day after the DeSantis press conference and his arrest, that he was completely confused by the ordeal.

“I don’t really understand, how did I commit fraud?” Grant told the newspaper. “I don’t understand any of this stuff.”

Meade said it should be reasonable for citizens to trust that when the government tells them they can vote, that they are eligible.

“It is their [government’s] responsibility to make the determination on eligibility to vote and to send you a voter education card,” Meade said. “It is purely natural for a citizen to rely on the government to make those determinations and that they be accurate.”

His group on Thursday set up a bail and legal defense fund for those arrested, most of which do not have significant personal financial resources.

“We don’t want anyone to take plea deals just because they can’t pay bail,” Meade said. “They are in danger of losing their jobs, and some are key providers for their families. This could impact more than just the individuals.”

Meade said his group is now advising that those arrested not speak to anyone, including the media, until they have attorneys other than public defenders, which his group is helping facilitate at no charge.

Attorney Larry S. Davis, who is representing one of the men arrested in Miami-Dade for free, said his client was arrested at 6 a.m. when a SWAT team banged on his door.

“He was in his underwear, and they would not let him get clothed before taking him to jail,” Davis said. “There were people in his backyard who were armed, and they used a helicopter. It disrupted the entire neighborhood very early in the morning.”

Davis would not identify which client he represented because the person is concerned they will lose their job over the arrest.

“They were approached to register to vote at a local WalMart. When they said they could not register because they were a felon, the person there said they could because Amendment 4 passed,” David said. “They helped him fill out the paperwork. He later got a voter card, and thought he could vote. That was two years ago.”

The defendants come from Orange, Palm Beach, Hillsborough, Miami-Dade and Broward counties. Only Miami-Dade County responded when asked for comment.

Suzy Trutie, the deputy Supervisor of Elections in Miami-Dade County said that when a county gets a registration applications they are forwarded to the state, which uses a series of databases to verify the person’s identity.

“After the verification process has been completed, the State notifies the County that the person’s eligibility has been confirmed,” she said via email. “Finally, the County issues a voter registration card to the elector.”

Alison Novoay, spokesperson for the Palm Beach County Supervisor of elections, said in an email that the state notifies their office when a prospective or registered voter is convicted of a felony or otherwise ineligible. After that, the Supervisor of Elections removes them from their voting lists.

“We were not notified by the state prior to 2022 that these individuals were ineligible,” she said. “Upon notification we immediately commenced the removal process.”

When DeSantis announced the arrests during a press conference at the Broward County courthouse, he said it was just the first wave of arrests. Beyond felons, his election investigations office is looking at allegations that undocumented immigrations may have illegally voted as well as individuals who voted twice in one election.

There have been three arrests made in The Villages, a Republican stronghold in central Florida, related to people admitting they voted twice in the 2020 election. DeSantis did not hold events highlighting those arrested, each of whom entered pretrial diversion programs and avoided jail time.

“This is just the first step. There are many more in the pipeline” DeSantis said during last week’s press conference. “We are not just going to turn a blind eye to this. The days of that happening in Florida are over.”

‘The GOP Has Turned to Semi-Fascism’ – PoliticusUSA

‘The GOP Has Turned to Semi-Fascism’ – PoliticusUSA

Trump Responds To Biden’s Speech By Ranting About Dementia