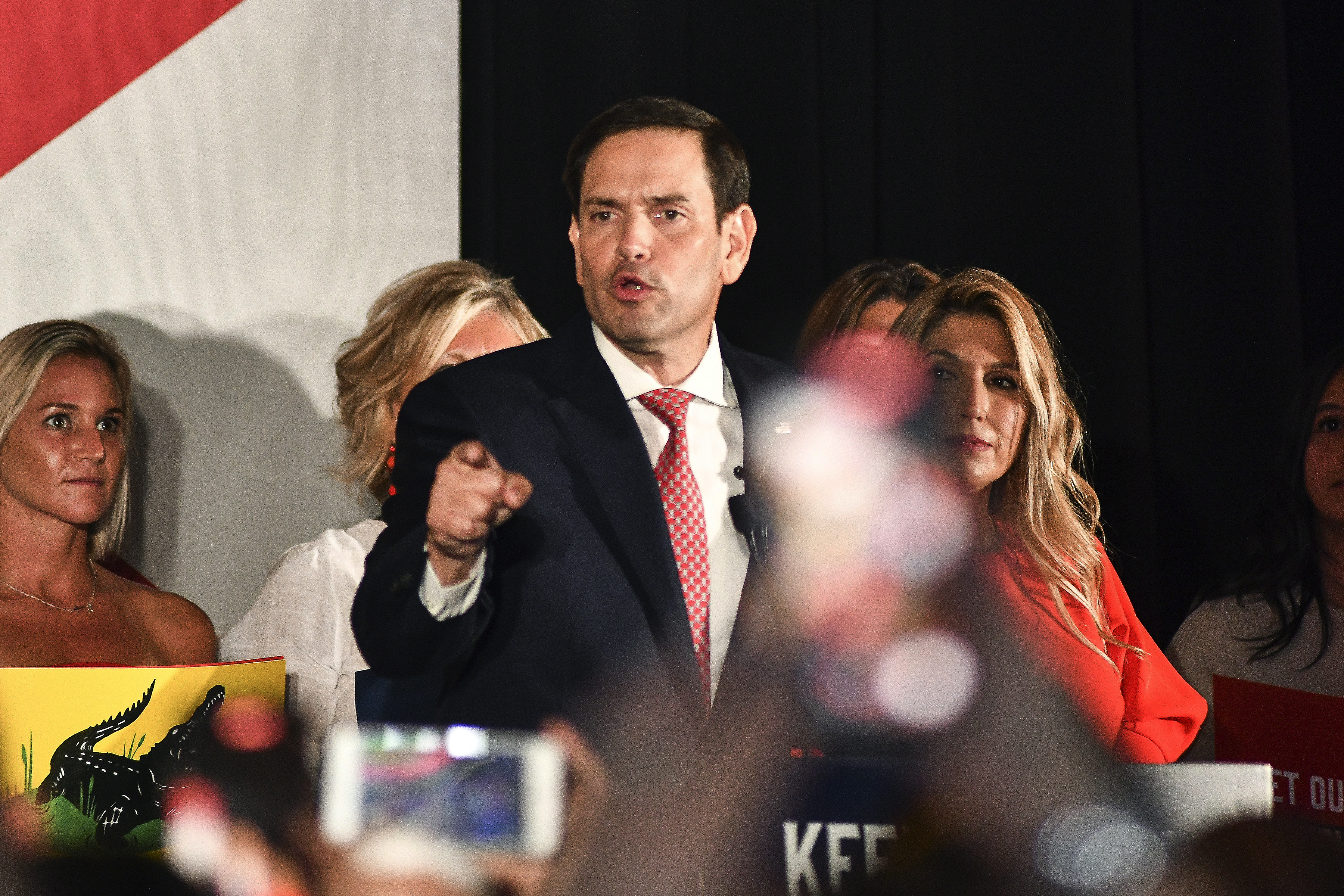 Rubio backers also see Demings’ fundraising lead as temporary, the result of the huge amount she is spending early on digital fundraising firms, which will bring in waves of small dollar contributions but at a very high cost.

“It’s not that surprising she has raised so much so quickly. She has a lot of qualities attractive to the national Democratic base and raises a ton of money on the internet. That’s an expensive way to raise money,” said Republican lobbyist Brian Ballard, who is helping Rubio’s campaign. “Eventually, though, that will stop. They have eaten all their seed corn.”

“Democrats will lean into this race and think they have a real shot rolling into September,” he added. “Marco will win by 5 to 7 points.”

The election is among a handful likely to decide the fate of the Senate, yet there’s growing significance in the Rubio-Demings contest since some GOP candidates endorsed by Trump are faring poorly, including Mehmet Oz in Pennsylvania, Herschel Walker in Georgia and Blake Masters in Arizona. Trump has endorsed Rubio, but the two have a difficult relationship stemming in part from their 2016 presidential rivalry when the two openly attacked each other.

Florida’s Senate race, however, will likely be affected by local and national issues, including abortion, record-high inflation under Biden and each candidates’ record in Congress. Rubio is seen as a tough-to-beat incumbent who will share the ticket with Florida Gov. Ron DeSantis — a big favorite in his race and one of the most popular Republican politicians in the country.

Both campaigns did not provide comments for this story.

Demings’ fundraising has gotten much of the early attention in the race, which so far has been less high profile than the gubernatorial race because neither candidate had a viable challenger in Tuesday’s primaries. Though Demings has raised nearly $48 million, she’s spent almost $40 million, including $10 million on “digital advertising” — huge numbers for a race not yet in the general election. Rubio has spent $21 million of his $36 million.

Democrats shrug off any suggestion that Demings’ big early haul is anything other than a sign of momentum. Demings has been able to use $12 million for TV ads compared to $6.7 million from Rubio’s campaign and the National Republican Senatorial Committee. Demings’ early statewide TV ads for months have highlighted her law enforcement background and amplified her criticism of Rubio over his above-average number of missed Senate votes. Rubio’s campaign on Thursday made a $1.3 million ad buy, an amount Demings’ campaign has been spending weekly since mid-June.

“Val is an inspiring and extraordinary candidate and is getting small dollar donations from across the state and nation,” said Rep. Darren Soto, an Orlando Democrat. “How often do you see a Democrat outraise an incumbent Republican in Florida? It’s quite something.”

Rubio early in the race tried to tether Demings to anti-law enforcement messaging that has been effective for Republicans in the past, even though Demings has three-decades of law enforcement experience. Many former police officers in the state supported Demings in 2020 when Biden was considering her to be his vice president.

Rubio and his allies, however, have also chided her for supporting Speaker Nancy Pelosi, which they claim is a sign she doesn‘t support law enforcement. That National Republican Senatorial Committee has spent nearly $3 million on ads blasting Demings, the first of which featured Florida sheriffs calling her a “rubber stamp” for Democratic leadership.

Republicans have specifically targeted Demings for supporting the George Floyd Justice in Policing Act, 2021 legislation that aimed to ban the use of chokeholds, limit qualified immunity for police officers and give the Justice Department power to investigate local police departments. The Democratically-led House approved the measure on a party-line vote, but the bill was blocked in the Senate by GOP opposition.

Soto, who serves in Congress with Demings and also represents Orlando, where she was once a police chief, said locals respect her law enforcement record and the GOP’s attempts to tie her to anti-law enforcement campaigns like “defund the police” are misguided.

“She did a great job here,” Soto said. “That’s backed by her continued popularity. ‘Defund the police’ is always what Republicans turn to, but it will hurt them with her. She has a great background and superior finances to get her message out.”

In her first TV ad in June, Demings directly addressed the attacks, saying, “In the Senate I’ll protect Florida from bad ideas, like de-funding the police.”

In a plus for Demings, Democrats have also received a series of positive developments, including falling gas prices and the passage of the Inflation Reduction Act. Democrats have heralded the measure as a historic victory that will address climate change, lower prescription drug prices by allowing the federal government to negotiate prices for Medicare recipients and slow inflation. The Congressional Budget Office, however, has raised questions about the bill’s ability to slow inflation that has long dogged the Biden administration.

“Obviously, when you look at all the fires, floods and storm threats, it threatens our entire way of life, yet our senators, including Rubio, could not lift a finger to support the boldest climate change bill ever?” Rep. Lois Frankel (D-Fla.) said. “That was just kind of amazing to me.”

Democrats have been lauding the bill’s nearly $370 billion in climate change funding, and goals of 40 percent emission reductions by 2030.

“It seems the national environment for Democratic is getting better, which should lead to the Rubio and Demings race tightening,” said Justin Day, a veteran Democratic fundraiser. “Val is doing the blocking and tackling that she needs to do in order to be successful.”

Republicans, however, claim the bill will drag down Democrats during this election cycle, in part, because it spends $80 billion over the next decade to beef up the IRS. That includes hiring thousands of new agents and increasing the number of audits Democrats say are focused on the rich but the GOP claims will affect middle-and-lower income taxpayers.

“It is not going to be helpful to them,” Donalds said. “It raises taxes on small business owners in a recession. It’s crazy they voted for that. We are in the middle of massive inflation. It’s not going to help Democratic Senate candidates.”

While Republicans acknowledge control of the Senate might be slipping away from them, they are confident Rubio will beat Demings, in no small part because of the popular Florida Republican governor.

“Demings is a paper tiger. With DeSantis up solidly in the polls and big voter registration gains favoring Republicans in Florida, there’s no universe that exists where Sen. Rubio does not come out on top,” said state Rep. Blaise Ingoglia, one of Rubio’s top allies in the Florida Legislature. “This rhetoric that she has a shot is more wishful thinking from Democrats than anything else.”

Ballard went further, saying Rubio is so safe, he hopes Democrats spend millions of dollars in Florida because it will take cash away from other key Senate races, and he hopes the NRSC doesn’t drain its financial resources in Florida.

“Without Marco winning, we can’t win back the majority,” he said. “But I hope the national guys don’t put too many resources in this race, Florida will be fine. We should be able to handle our business.”

With A Stroke Of His Pen, Biden Cancels $20,000 In Student Loan Debt – PoliticusUSA

With A Stroke Of His Pen, Biden Cancels $20,000 In Student Loan Debt – PoliticusUSA