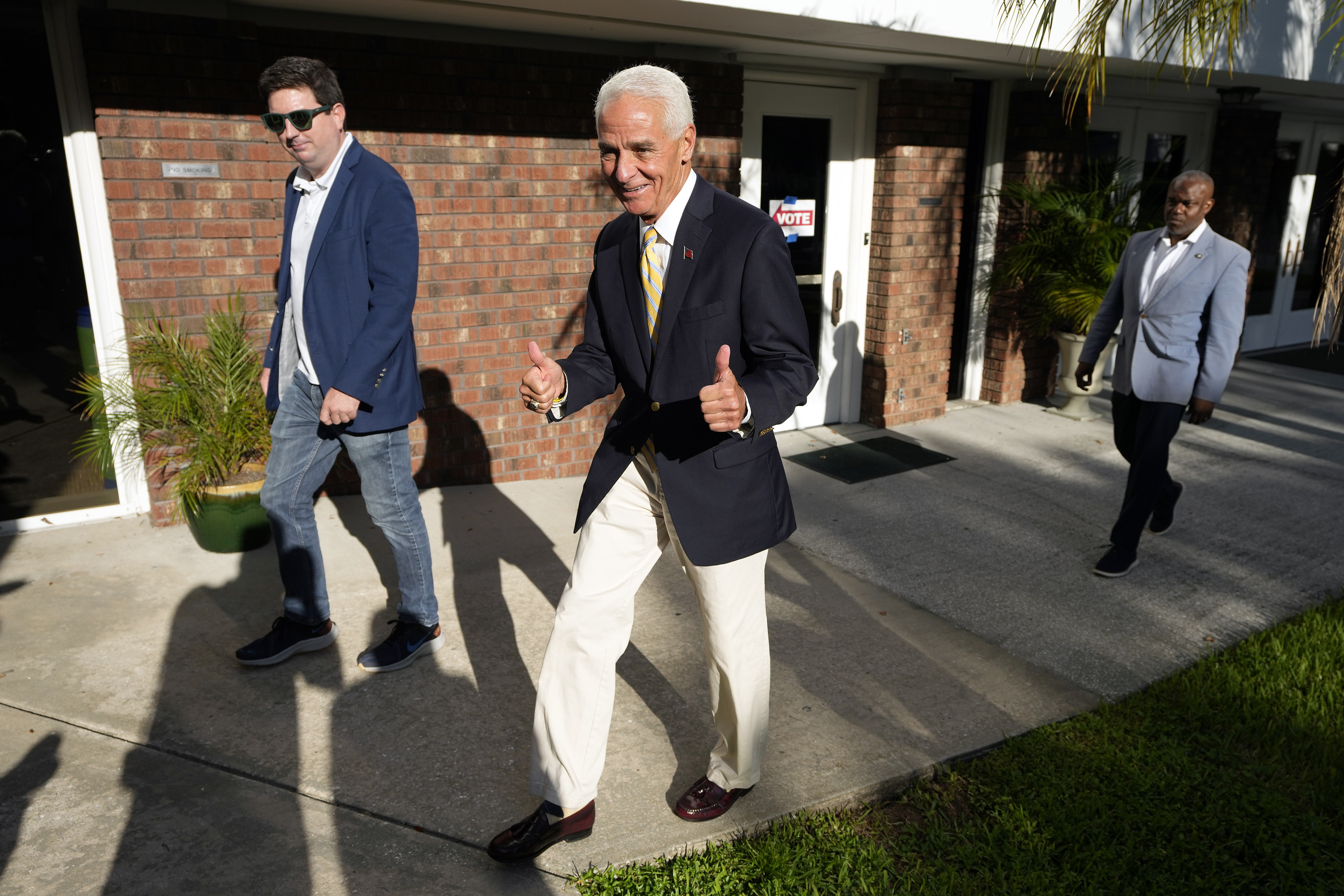 Her attacks, though, never really broke through with Democrats, and the 66-year-old Crist piled up endorsements from prominent Democrats as the party coalesced around him rather than 44-year-old Fried, who has only served in elected office since 2018 and was trying to become Florida’s first female governor. Her campaign slogan and prominent social media hashtag was “Something New.”

Crist had led in most public polling, raised far more campaign cash than Fried and had most of the Florida Democratic Party’s institutional support behind his campaign, which underscores his three decades in Florida politics. The party will now begin the process of coming together and is planning an Orlando unity event on Thursday.

Crist now enters the general election coming off a contentious and expensive primary to run against DeSantis, who had no real primary foe and is sitting on more than $130 million between his campaign and an aligned political committee.

While Fried’s career as an elected official may have ended for now, she plans to move ahead with a proposed citizen initiative protecting abortion rights. Fried has already been huddling with lawyers about drawing up a measure and getting enough signatures to place it on the 2024 ballot.

Throughout the primary, Fried campaigned against abortion restrictions, including Florida’s new law that bans abortions after 15 weeks of pregnancy. The law does not provide for exemptions for victims of rape or incest. She ramped up those efforts after the Supreme Court struck down federal abortion protections enshrined in Roe v. Wade.

“Win or lose, that fight doesn’t go away,” Fried said in an interview during a campaign stop a few days before the primary.

During that same interview Fried, said she “had no idea” if she would run for political office again. She said was not a “career politician” but added that “I’m never going to stop serving the people of our state.” Before being elected Florida’s Agriculture Commissioner, Fried was a marijuana lobbyist.

For most of the primary, Crist tried to maintain his reputation as a “happy warrior.” But in the final week of the campaign he spent heavily on negative ads hitting her for a previous $2,000 contribution to Republican Florida Attorney General Ashley Moody, and for her relationship with Republican Rep. Matt Gaetz, a pro-Trump firebrand who previously served in the Florida House. Fried’s campaign responded by calling on any of Crist’s female supporters to “disown” him.

“It’s time for any woman who endorsed Charlie Crist’s campaign to speak up, disown him, and reject his lies about supporting women and women’s health,” said Fried spokeswoman Caroline Korba. “He is a fraud, a coward, and a three-time (about to be four-time) loser.”

Crist previously served as governor from 2007-2011 as a Republican, but towards the end of his term left the GOP as he was preparing to run for Senate against Marco Rubio, who at the time had become a darling of the fast-growing tea party movement and was seen as the overwhelming favorite to the Republican nomination.

Crist made an unsuccessful Senate bid as an independent, and became a registered Democrat in 2012 ahead of his failed 2014 bid against GOP Gov. Rick Scott. Since then, he has been elected twice as a Democrat to a St. Petersburg-based congressional seat. He has been a staple in Florida politics for nearly three decades, starting his political career as a state senator in 1992, and over the years serving as state’s education commissioner, attorney general, governor, and congressman.

It’s unclear who Crist will pick as his running mate, but those in the running include former Democratic state Rep. Sean Shaw, a Black former state representative who served as a key Crist campaign surrogate; former Rep. Gwen Graham, who currently serves as an assistant secretary for education in the Biden Administration, and Karla Hernandez-Matz, president of the United Teachers of Dade.

DeSantis holds a nearly six-point lead over Crist, according to the Real Clear Politics average of polling, but the governor has not yet gotten fully engaged. He spent little from his war chest during the primary and only recently went on television with his first ad.

In large part because DeSantis reopened Florida’s economy faster than most other states during the pandemic, he became a rockstar with conservatives in Florida and across the country, catapulting him into the top tier of potential 2024 Republican presidential candidates and making him one of the most popular Republican governors in the country.

‘We will not be bullied’: US politician arrives in Taiwan | Politics News

A letter … to Laci Peterson, who was murdered by her husband | Women